The adaptive join was introduced in Azure SQL Database and in SQL Server 2017. It’s a new join type that can enable the choice of a Hash Join or Nested Loops join method at runtime until after the first input has been scanned. In this video, we’ll be going to learn about how this adaptive join operator works and will also see some of the dependencies to use this join.

In this session, we’ll be going to learn about the next physical operator of the T-SQL execution plan called an Adaptive join. The Adaptive join was introduced in the Azure SQL database and in SQL server 2017. It is a new join type that can enable the choice of a Hash join or Nested Loop join method at runtime until after the first input has been scanned.

A query plan can dynamically switch to a better join strategy during execution time to decide when to switch to a Nested Loop join or a Hash join based on the threshold defined in it. As a query is executed and it is determined that it has either met the threshold level or exceeded it.

The processing continues down the correct branch of the Adaptive join. The way it works is that it starts out building an adaptive buffer of join input. If the join input exceeds a specific row count threshold, then your plan continues with a Hash join. If the row count of the join input is small enough of threshold that is Nested Loop join would be more optimal than a Hash join. Then the plan switches to a Nested Loop join. One thing to note is the Adaptive join is applicable only to Columnstore index scan, which is used to provide rows for the Hash join build phase.

Before we go ahead, this is the same query that we have used in the earlier demo session. The only difference in this demo is the change in the WHERE clause. In the WHERE clause, I have specified a Territory ID =1. 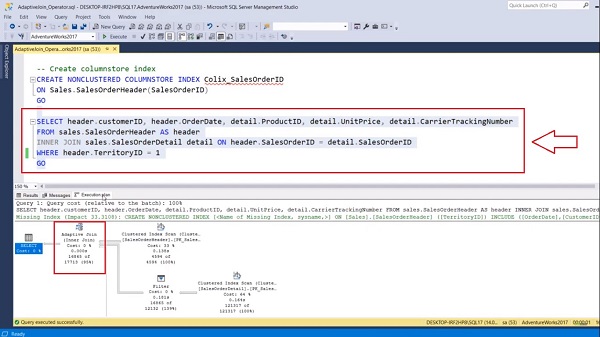 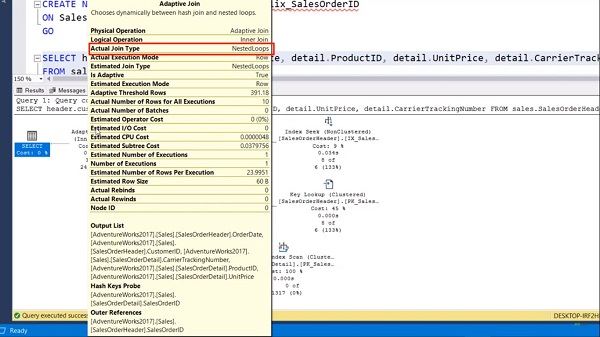 It means we have a Nested Loop join operation which we can see in the adaptive join type. Technically this Adaptive join does not represent a new type of join, but the behavior of dynamically switching between the two core types which are Nested loop and Hash match makes this effectively a new join type.